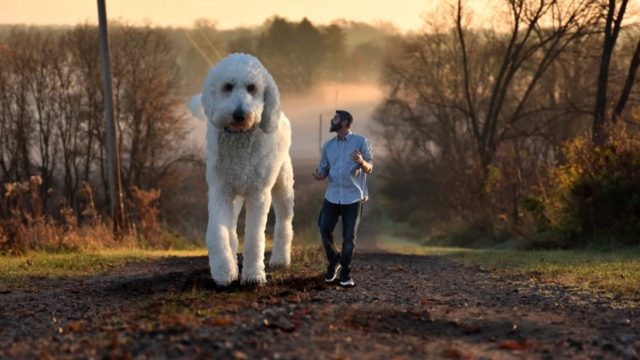 There is this pooch that is a taller tower of fur than other enormous dogs like St. Bernards and Alaskan Malamutes!

This dog is named Juji. Larger than life, Juji in his numerous photos is way bigger than any other dog!

The @christophercline Instagram account of Juji’s owner has over 200,000 followers. Among the many favorite dogs of Instagram, Juji has captured thousands of hearts from his followers as he is gigantic. This pooch, in over 2,000 posts, looks like he is over seven feet tall!

When you see his viral photos, you’d believe that this pooch is the biggest one of them all, yet the owner revealed in our shared video that he uses photoshop to create the images he posts on Instagram. Juji’s owner, Chris Cline, is a professional photographer that can create pictures for anyone who wants to ‘edit their pet’ in photoshop to change its size, set in their desired scene.

The fantastic Instagram images include that of Juji towering over his owner. Over time, as this dog’s claim to fame because he was a giant got established. Juji is so famous that he no longer needs to be larger than life at all times. He now appears in various Instagram posts as his regular self and even as a tiny dog.

This adorable pooch got enlarged, and the different scenes set, some of which are hilarious, most of which are enthralling. You’ll love to see the fabulous photos of Juji! Watch this video about the doodle dog and how the owner made photoshop work like magic!

Source: Life to the Max TV|YouTube