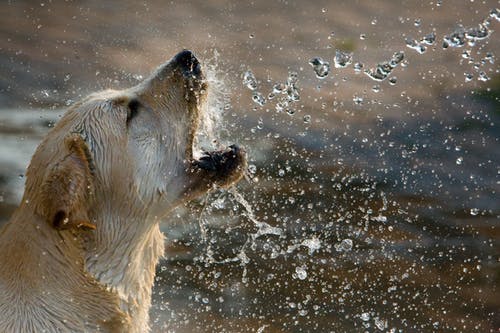 A mum was doing yard work when she realized that her seventeen months old son, Nolan was not at the last place she had seen him. She went around the house and realized that the family dog was missing too.

The duo were nowhere to be seen and could have wandered off.

In a panic, she called 911 and then ran to look for her son and the dog. On reaching the lake, that was likely the direction that her son and the dog must have taken, panic turned into horror when she found her son’s hat soaking wet on the pier. She feared the worst.

Then when she looked a little bit further on the side, she spotted AC, the dog, with Nolan on the ground next to him, lying face down, with his legs still in the water.

The police rushed her son to the hospital where he was treated.

Thankfully, he recovered after some time.

On investigating what could have happened, they discovered that their beloved dog, now turned hero,  had attempted to grab the child from going under when he fell into the water, by pulling on the child’s hat.

And when that failed, AC jumped into the water and pulled onto the child’s pants, which were ripped as a result. AC was able to pull Nolan to safety and out of danger and had saved Nolan’s life. The Stafford family will be forever grateful to the dog that they had rescued a few years before.

AC, a Chesapeake Bay Retriever had been rescued by Nolan’s dad when he adopted the dog from an animal shelter, just three days before he was scheduled to be put down. The dog had suffered serious mistreatment in the hands of his previous owner and had to be nursed back to health. When Nolan was born the two were inseparable. And AC was there when Nolan needed him the most.

Watch the miraculous story below.