Home Dog Stories Tug Of War: A Game For Your Dog 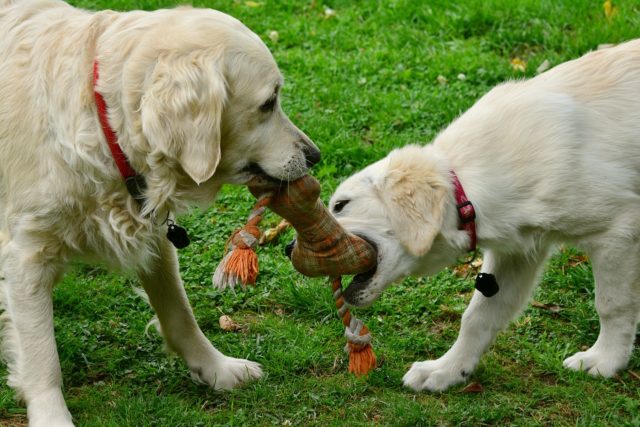 Tug of war – a game that many dogs naturally love to play. This is a game that allows dogs to display their predatory nature in a healthy manner.

Although some would argue that this causes dominance and aggressive behavior, the game is actually a great form of mental and physical exercise. Other than that, playing this game with your beloved dog reinforces your bond with your dog too.

There are some rules that must be followed in playing this game to keep it from going overboard.

As the game is a predatory in nature, you might notice that your dog begins to growl especially as he gets excited. This behavior is normal. However, take control and ensure that he doesn’t get overly excited.

If his tail is still wagging while he’s growling a little, this should still be fine. However, if he gets more intense or if you start to worry about the situation, go for a break. If at any point his teeth touches you, go for a break too.

Break time is when the “drop it” or any other release command would come handy. Give him the release command and take a break for about 30 seconds. Give him other commands like sit and down while having a break if you want to. Then, resume the game once you notice that he’s already relaxed.

If he repeats the mistake of being overly aggressive or having his teeth touch you, end the game. This will teach your dog that he should be more careful, especially with his teeth. While it is normal for his teeth to graze you every once in a while, he will eventually understand that being careful is part of the rule.

Don’t worry about letting your dog win. This is actually a great way to boost his confidence and also a way to reward him. Don’t let him win if he misbehaves while playing the game though.

You may also allow your dog to play tug of war with another dog. Just make sure that they get along well and that you’re supervising their playtime. Follow the rules to keep things from getting out of hand.

Playing tug of war does not just mentally and physically stimulate your dog. It is a good way for you to exercise too!