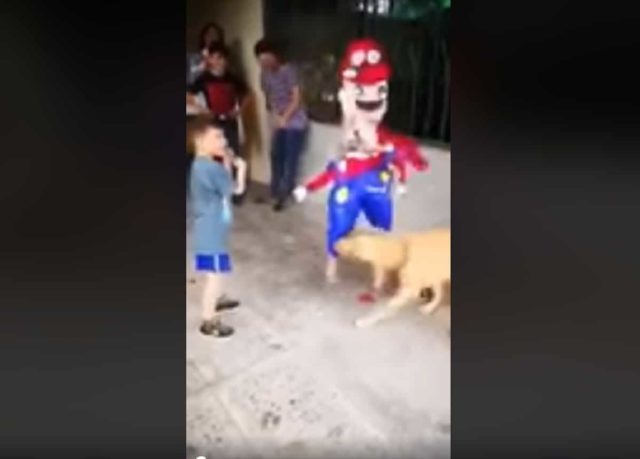 It is typical to see Piñatas on different occasions, celebrations, or ceremonies, especially during birthday parties. Breaking off a Piñata usually symbolizes religious beliefs and traditions. But modern-day Piñatas do not just signify customs or behaviors but also add fun to festivities.

Piñatas are generally associated with the Mexican culture but are also used in other nations. But who says having fun with Piñatas is limited to humans? Here’s one proof that anyone loves breaking piñatas.

Everyone knew that he tried everything in his power to hold back. Even though he wanted the candies that much, he tried and controlled himself not to hurt Mario. But the papier-mâché was really a stubborn piñata. It just won’t allow it to spill.

Not long ago, a video clip that was shot at a children’s birthday party circulated on the internet. In the clip was one young boy letting loose a surge of hard hits and body blows on a candy-filled sculpture. But no matter how hard he tried, the boy’s best attempts simply didn’t work. Mario just won’t break.

That whole time, watching as the boy struggle, was the family’s adorable yellow pooch. Realizing that the young boy was obviously incapable of carrying out the workload, he valiantly stepped in and did it himself.

Here’s the footage of the heroic canine in action:

With one big bite, Mario finally let go of the goodies. The crowd that assembled cheered as it rained candies and chocolates. With no doubt, the adorable pup was to be thanked for saving the day. Had he chosen to just watch and stand idly at the kid wrestle figurine Mario, the sweets were probably still hidden. Yet, he refused to do nothing and decided to use his power and strength to save the day.

Surely, we, people, do not deserve dogs.