Home Dog Stories Captivating Footage Of A Man And A Dog Who Rescue A Baby... 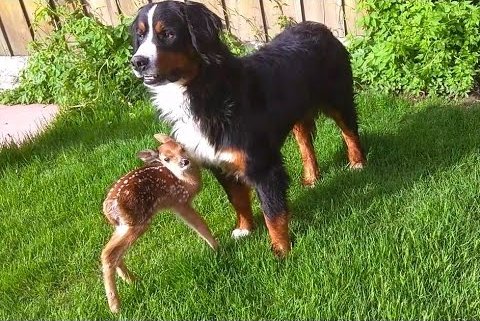 A deer gives birth to two fawns and starts grooming them. One of the fawns is unable to walk due to an injured front leg. She is unable to keep up with her mother and brother.

Sadly yet luckily, the fawn is left at the back yard of a good Samaritan, who takes in and cares for the fawn in the days that follow. Knowing that the chances of the fawn making it out there on her own, with all the predators lurking around, are slim to none.

The man has other animals in his house including three dogs and three cats. At first, the other animals hesitantly interact with the strange visitor, with the occasional curious touch. Then one day, amazingly out of nowhere, one of the dogs named Mack, a Bernese Mountain Dog, takes up the role of foster dad when his ‘fatherly’ instincts are unleashed and he becomes the fawns groomer and protector. The two become inseparable.

The fawn now has two caretakers and with the all the TLC coming her way begins to blossom. The man makes a brace out of an oatmeal box and the leg is now able to straighten and within no time, the fawn is running around with Mack close behind. Mack even helps out when the fawn is being bottle fed.

Then, too soon, the time comes when the fawn is strong enough to be released into the wild and hopefully back into her mom’s care. The man begins to look for the fawn’s mother. And after a few heart wrenching failed release attempts, eventually the fawn is reunited with her mother.

One year after the release, the man spots the mother deer and her two now grown deer jumping over fences. With the deer that he took care of one year before, hesitating a little as though she can remember her first caretaker, her first home and Mack her best friend.

Dogs by nature are kind and compassionate, so when Mack saw another animal in need, he stepped up and did what needed to be done.

This video is very heartwarming and touching due to the way the fawn was rescued and taken care of by a kind man and his loving dog.