Home Dog Stories Adorable Dogs Win The Day In Spite Of An Underwhelming Performance At... 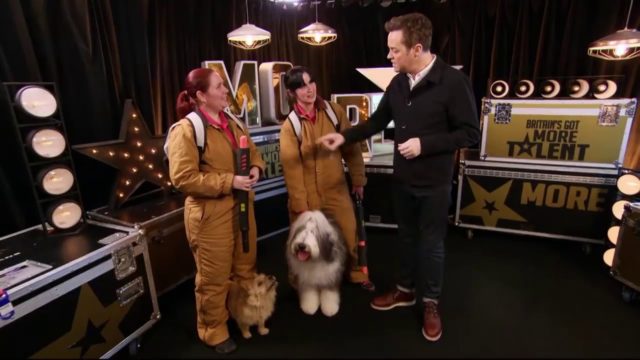 A dog performance at Britain’s Got Talent two weeks ago left even the presenter shocked. The look on Stephen Mulhern’s face was priceless when at the end of the performance, he exclaimed: “I cannot believe that you made it through!!”.

The audition began with two women, Jo and Donna with their two dogs, Melanie, a Norwich Terrier and Piper an Old English Sheepdog, performing what was supposed to be a dog trick performance turned comedy with the song ‘Ghost Busters’ playing in the background. Jo and Donna are holding fumigators as seen in the movie “Ghost Busters”.

All four then make it back to the center of the stage and begin the performance. The dogs are unable to perform at least half of the tricks, while for the other tricks, there are several attempts before success.

The whole performance ends up leaving everyone laughing instead of awwing.

All the same, the dogs are so adorable that what the performance lacks in finesse and technique, they more than make up for in unintentional humor.

That is probably what ultimately wins over the hearts of at least three of the judges. Simon Cowell in his straightforward, usual blunt style says “that was the worst dog trick we have ever had”.

What follows is a dumbfounded and unsure audience. The mixed looks on the audience faces is evidence of how awkward the audition was. Many look puzzled and do not know how to react.

At the end of the day, the dogs are so endearing. Unbelievably, they get three yeses and are through to the next round.