When you got your first car, you were so excited and you want to drive around and let your friends join you on a road trip. It was like you have the freedom to go anywhere you want to go.

Pigeon, a Pit bull, was paralyzed because of a car accident that happened when she was still living with her first owners. Lucky enough and though being paralyzed, she was adopted by a family that promised to take care of her and give her a chance to run again. The good-hearted family enrolled Pigeon in a physical therapy and rehabilitation program at Fetch Rehab located in Savannah, Georgia. 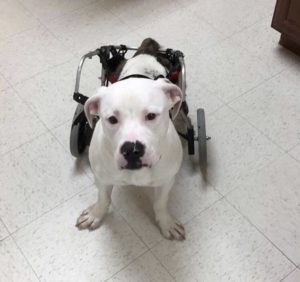 It took her several months and many aqua therapy sessions, but she remained patient and cooperative. Pigeon’s strength came back until one day she was able to use her front legs to drag her body. But even after her strength was restored, Pigeon didn’t seem to be happy.

Her owner, Carol, surprised her with a custom-made wheelchair last December so that Pigeon could run along with her dog-siblings. Everyone was amazed that the first time she used the wheelchair, it was as if the wheelchair was a part of her body.

Carol said that the dog loves the wheelchair so much, insisting her owners to put her in it all the time. While other dogs take time to get used to wheelchairs, Pigeon just seemed to become a different dog the moment she was first put in her wheelchair. 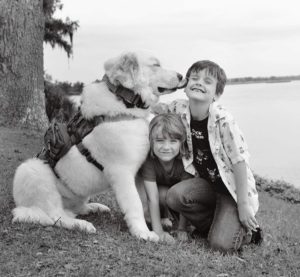 Pigeon’s personality is great. She inspires a lot of people whenever they see her. She came a long way after the recovery from the car accident.

Her quick recovery would not have happened had it not been for the help and patience of the staff at the rehabilitation center whose help contributed a lot to her quick adjustment to her new equipment. She now visits the Rehab center once in a while.