Home Dog Stories The Blind And Deaf Dog That Everyone Loves 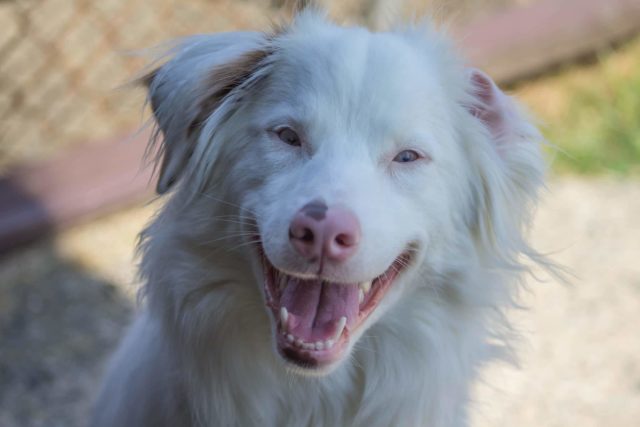 Unable to see or hear makes it difficult for one to navigate into the world. It is especially difficult to communicate with people around you. But when you have someone who is patient and persistent to teach you how to communicate, then you are one of the lucky ones.

Maisie was born blind and deaf. She was abandoned on the streets and was found by Haley Justice. She decided to foster Maisie.

It was especially hard for her at first since there was no form of communication. She could not handle not being able to communicate so she patiently taught her how to. Within days, she was already able to sit and lay down.

The most difficult part would have to be exploring the world without the sense of sight. Yet, Maisie would fearlessly go out into the world and take steps blindly. She is bold and is always up for anything which is an amazing part of her personality.

Maisie is a double Merle which was caused by bad breeding. Such dogs are prone to abnormalities. It is one hundred percent preventable, yet people fail to take the necessary precautions.

Within a month or two of fostering Maisie, Haley knew that Maisie belongs to her, so she ended up adopting her. Haley just fell in love with her.

Haley has even started doing artwork about Maisie and the Merle breed to raise awareness and to be an advocate for the breed. She wants to let people know that bad breeding is preventable and this kind of breed just needs the same if not more love from the people around them.

Maisie might be different but that does not slow her down. Nothing does. She is just as active and as joyful as any dog out there. Maisie is proof that when people who love you surround you, there is nothing you can’t do.