Dogs are considered man‘s best friend due to their physical attributes and sensory capabilities. The strong bond between human beings and dogs has led dogs to be uniquely attuned to human character. Scientists have uncovered some cognitive skills in domestic dogs that are not possessed by dogs’ closest canine relatives. Human beings communicate with dogs using vocalization, hand signals, and body posture. While dogs are considered man’s best friend, they can, at the same time pose threats and danger especially when they are provoked or when they sense danger. A dog is considered dangerous if it attacks a person or other animal, causing physical injury or death.

When dogs sense danger or get provoked, they will always act to protect themselves or their owners. Dogs react by biting the perceived enemy or any person who seems to be a stranger. Their sharp claws with powerful muscles can lead to serious injuries and infections. In 2015, in the US alone, an estimated 4.5 million people were bitten by dogs. 77 % of these bites were from family pets or those from a neighboring home. Furthermore, children have a much higher chance to be bitten in the face or neck. 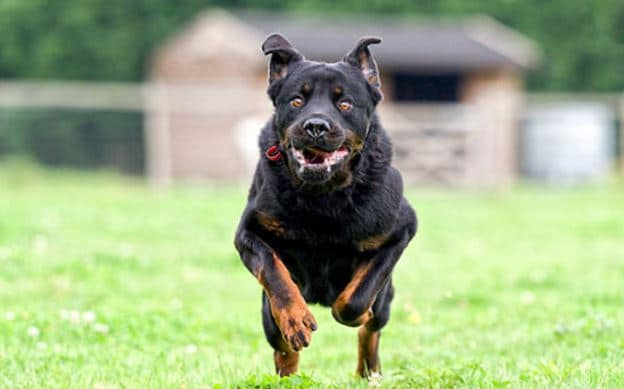 A Rott launching an attack

Apart from dogs inflicting injuries on human beings, they can also lead to death depending on the degree of injury.

Deaths resulting from rabies are also common. Rabies is a disease for which dogs are the most important vector. The WHO reported that 55,000 people in Asia and Africa are reported to have died from rabies. Rabies is present in all continents except Antarctica. The cost of treatment is much higher with the average cost of rabies post-exposure prophylaxis (PEP) ranging from US$ 40 in Africa to US$49 in Asia. This can be a catastrophic financial burden on the affected families whose daily income is below the one dollar mark.

To avert being in danger, there are certain measures to take every time you risk being attacked by a dog. The control of this common danger can be exercised at an individual level or by legislation.
To protect the safety of the community from a dog that fits the description of a dangerous dog, measures will be taken by the local government. This involves a range of specific controls such as being desexed, confining to a special enclosure, undertaking behavior modification and wearing special collar/muzzle and lead when being exercised. In the case where the dog is aggressive and the owner does not comply with the issued directive, the local government has the power to euthanize the dog.

Certain dog breeds are also considered dangerous. Some countries like Australia have banned the importation of certain breeds. They have also introduced breed-specific legislation that requires some breeds to be desexed and regulated. All dogs are also required to undergo an assessment test before they can be adopted. This is important in deciding on the type of breed to be adopted.

The pet owners also need to be responsible to reduce incidences relating to unpredictable dog behavior. This requires public education regarding dog behavior and early management of problem behavior and responsible breeding to select appropriate behavioral characteristics.
Many countries have embarked on mass vaccination of dogs to eliminate rabies by 2025. There has also been increased availability of vaccines free of charge to human beings and this has contributed to a reduced number of mortalities by 50%. Through a combination of these methods, rabies can be controlled.

Tips to keeping yourself safe from an attacking dog

The following strategies may seem naïve and impractical, but they will always put you in a better chance of surviving a fatal dog attack. They are all useful if you find yourself in an event where the dog wants to bite you.

1. Avoid walking near homes where a non-friendly dog lives

Since dogs are territorial, they will always attack strangers who come near their owner’s compound. You can avoid this by not passing through such territories. 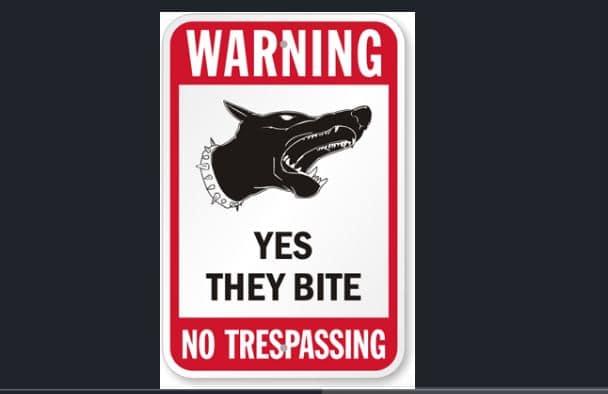 Obeying such signs is your best defense

2 Wear a whistle around your neck

This will help you sound an alert at the sight of an approaching dog. Dogs can be witty sometimes. They may approach you silently and innocently, only to knock you down with a bite.

3. Carry a walking stick or cane

This may sound like a piece of bad advice, but being in a position to defend yourself, sometimes matter the most. The elderly for example may not have the energy to scare away a fighting dog or scamper for safety. Having some sought of barrier between you and the attacking dog will be of great help.

4. Shout firm commands to dogs that approach you

Most dogs respond to firm commands since it portrays authority. The commands should be the everyday phrases an ordinary dog can understand.

5. Before the dog jumps on you, make an effort to avoid body contact

Giving in in a dog fight isn’t a good idea. If you have an opportunity to dodge the jump or tackle the bite, the better.

Most dogs interpret strong eye contact as a cause for alertness and aggression. Once aggressive eye contact is made by the wrong person (a stranger in this case) the results are always not that friendly. 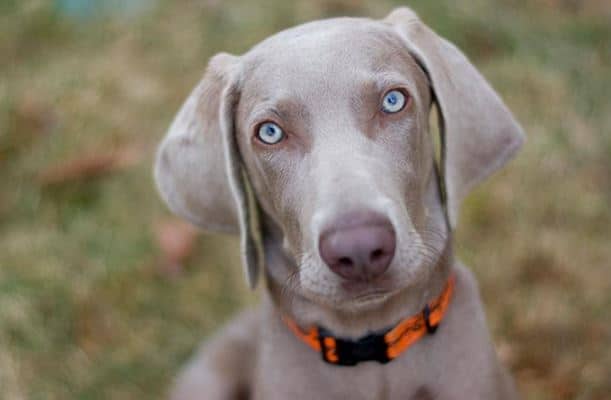 If confronted by a dog, the best thing you can do is stay calm and assume a relaxed posture. More often than not, the dog will smell you and go. Dogs are very smart and can easily tell between a fugitive and an innocent by-passer. 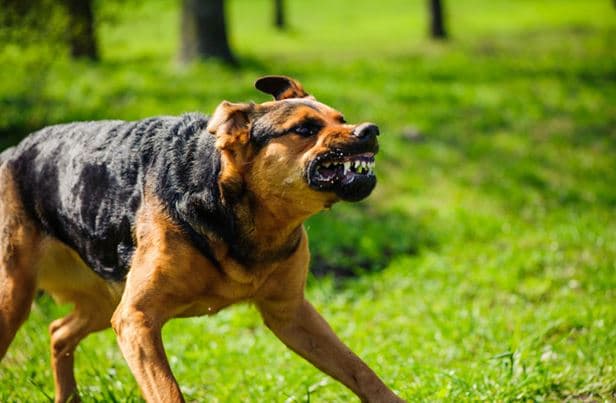 An aggressive dog posing before an attack

7. If you witness an attack, do what you can to help

As a third party witnessing a dog attack, it’s your responsibility to help the victim in any way possible without necessarily having to expose yourself in the process.