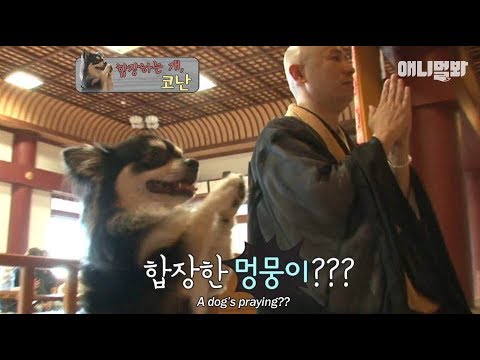 Dogs are capable of amazing things; some dogs have the ability to hypnotize people, others have amazing athletic capabilities like playing soccer and skateboarding, while others can play musical instruments.

Dogs express themselves using their body language to communicate their needs. They have a certain posture that expresses happiness, the need to be petted, hunger, to express that they are afraid, and to show that they are tired, sleepy or in pain.

Usually, when dogs assume a praying posture, it is a sign that they are suffering from abdominal pain and they crouch down in an attempt to reduce the pain. Interestingly though, there is a dog named Conan that lives in a Buddhist temple that is known for praying.

The adorable dog started praying when he was three months old. He would observe the monks praying and to everyone’s amazement, one day Conan raised himself on his hind paws and began to pray. He actually stands on his hind paws with his front paws held together in a praying stance.

Since he started joining the monks for prayer, he has never looked back. He even prays by himself.

All who see him are usually surprised at this. Conan may not understand the significance or the purpose of prayer, however, his commitment to prayer is commendable. It is obvious that he enjoys it very much.

Prayer is not the only area where Conan stands out. He has been featured in many newspapers and has a fan following from all over the world. He even receives fan mail. Many of his fans also travel long distances to meet him. Conan never disappoints, he usually graciously greets his visitors with a prayer. It has now become his usual way of greeting people.

Unlike other dogs, Conan also eats vegetables and after his meal, he goes to the temple for prayer.