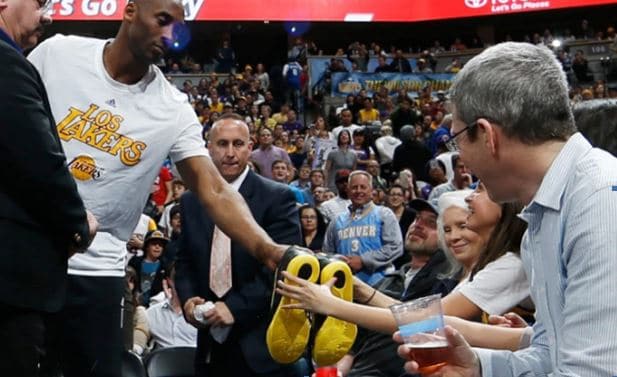 After the tragic helicopter crash that took the life of Kobe Bryant, his daughter Gianna and seven others on board, a lot has been surfacing about the Basketball Legend. Fans, basketball lovers, celebrities and ordinary citizens took to social media to pass their heartfelt condolences.

Apart from the chain of great and prominent friends, adorable family, and a cabinet of NBA trophies; Kobe had one loyal friend he hardly kept out of the limelight of mainstream media. A common dog breed, a kind, and reliable family friend.

For a man of his stature, many would expect Bryant to own a unique, perhaps notorious breed that would match his dominance and masculinity in the game. Talk of something feral, tenacious and fearless like a Pitbull or the rare Presa Canario and you would be wrong.

Instead, he settled for a black Labrador retriever. He was the most gentle of human companions, an outgoing, agile and even-tempered man.

Bryant’s Lab isn’t just another common pet sourced from a local breeder. He has been carefully trained and groomed to be a champion- just like his master.

He enjoys family fun times including friendly hugs and curdles from close family friends. Think of a genius dog among the well-behaved and life-filled labs, and Kobe’s Crucio is a rare gem. While these aren’t the only traits tied to this celebrity dog, below are all you need to know.

The dog has a harry-porter inspired name

Following a confession for his love of books such as “The Alchemist” and “Blink”, Kobe Bryant talked of his obsession with the film series “Harry Potter” where he coined his Lab’s name. Crucio, the name of his dog is one of the three unforgivable curses in J.K Rowling fantasy series. Despite the creepy origin of the name, the dog looks very adorable.

During a match with the Denver Nuggets in March 2016, Kobe Bryant was limited to 11 minutes of play after an arching shoulder injury got the best of him. He spent the remaining minutes on the bench where he got the attention of two young Lakers fans who were seated behind him.

Kobe promised to hand over his autographed shoes if they were to guess right the name of his dog. Leaving them a clue, the fans gambled with more than 15 random names before earning those sneakers off the legend’s feet. 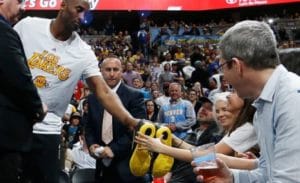 Bryant giving out his autographed sneakers to a fan

Bryant occasionally enjoyed a pool session with the Lab

Before his fateful death, Kobe was a renowned dog lover who occasionally posts pictures and videos of his dog training, playing fetch and swimming in his company. While this isn’t a rare depiction of sincere love and companionship for the animal species; it shows a lot about this soul who had a strong bond with his canine friend.

Many times, dog owners will have a separate pool for their dogs, but not Bryant. For him, Crucio was and still is an important family member who deserves better than the every-day dog. 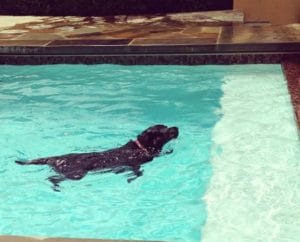 There is a common saying that “all dogs are created equal”, and maybe Crucio is an exception. Raised diligently to serve and respect his master, Crucio landed under the best of caring hands and luckily enough, the hands of a Legend.

For Bryant, basketball was the common denominator and with the love of his entire family; we get to understand more of this spirited playmaker who left us without a goodbye.